What is Diffusion? A Colorful Example to Explain (with video)

You have to understand diffusion if you want to master Fluids and Electrolytes in nursing school. So let’s start with the basics: What IS diffusion?

A Silly Diffusion Story to Help You Remember

Let’s pretend that people are molecules for a moment. You’re squeezed into an elevator with 20 other molecule people. It’s crowded, it’s cramped, everyone’s sweaty and starting to feel a bit claustrophobic. There’s a high concentration of molecule people in the elevator.

Finally, the elevator doors open to reveal the lobby.

All of the molecule people rush out of the elevator, breathe a huge sigh of relief, and each one goes in their own separate direction. There is a low concentration of molecule people in the lobby because they have room to diffuse around.

A Colorful Example of Diffusion (with video)

Hopefully that little story explanation helped you to better understand what diffusion is, but I know that it can still be difficult to understand concepts when you can’t SEE them happening at a molecular level.

Using hot water and food coloring, you can literally see diffusion in action in the video below. (And I included more important notes about diffusion in this post, with diffusion examples, so make sure you scroll down past the video).

The main thing to understand about diffusion is that it is the molecules that are moving, NOT whatever the molecules are in. This is the key difference between diffusion and osmosis.

The reason this can be really confusing in nursing school is because osmosis and diffusion often happen at the same time.

Remember that the human body is extraordinarily complex! There are many different processes happening quickly, simultaneously, and continuously. Water and particles are always coming and going, crossing multiple semi-permeable membranes, and responding to countless different variables.

But if you can understand how diffusion works by itself, then it will make it MUCH easier to understand fluids and electrolytes in general. 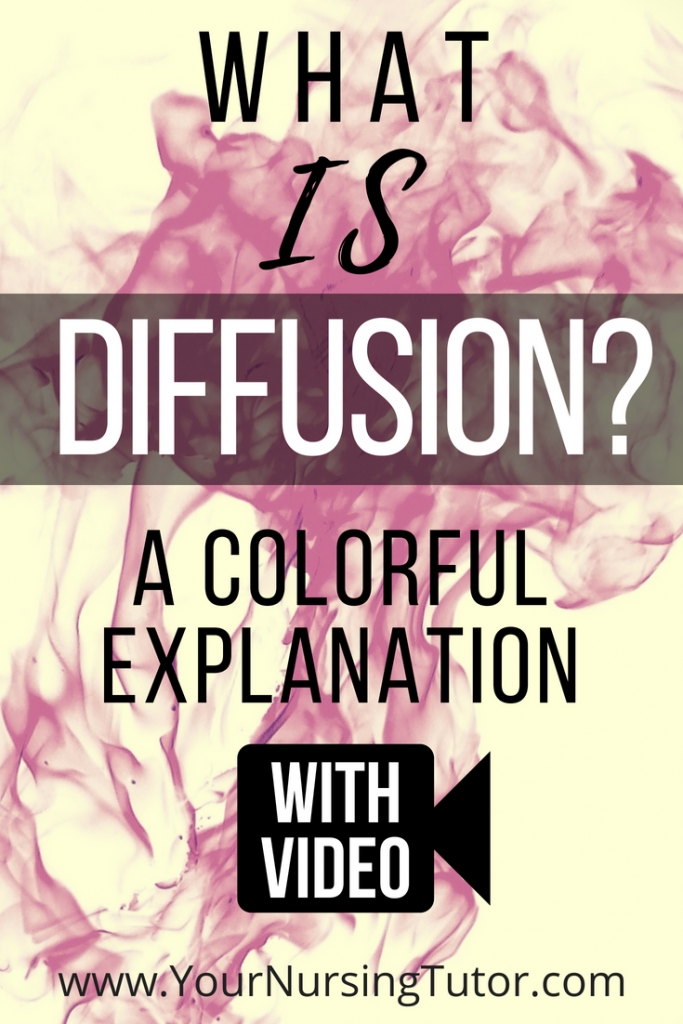 Besides food coloring in water? 😉

Diffusion examples can include:

Anytime a group of molecules spreads out in an attempt to get as far from each other as possible, diffusion is happening. Diffusion can happen in a liquid or in the air.

You can make diffusion happen faster by heating up the molecules (hot molecules move faster than cold molecules). You can also speed up diffusion by physically mixing everything up, like when you stir your creamer into your coffee!

(Did you ever stop to think that when you pour creamer in your coffee, it would eventually diffuse evenly without you ever stirring it?? Science is cool!)

A Funny Story About Dog Poop…

I once had a classmate who had been a biology major. She confessed to me how disgusted she was whenever she smelled dog poop. And it wasn’t because of the actual odor.

It was because she realized that the awful smell was caused by tiny molecules of dog poop floating away from the dog poop pile and into her nearby nose. (I bet she wished she had gotten one of these…)

Will you ever again be able to think about diffusion without wrinkling up your nose in disgust? Leave me a comment and let me know!

2 thoughts on “What is Diffusion? A Colorful Example to Explain (with video)”