I love seeing that “lightbulb” moment when students realize that they’ve been making the endocrine system a lot harder than it needs to be. Which is why I was so surprised when I realized that I’ve never, ever explained the best way to study Endocrine diseases on this blog. After all, Endocrine is only about the scariest, most intimidating, and seemingly complicated Med-Surg topic that you’ll ever encounter in nursing school. 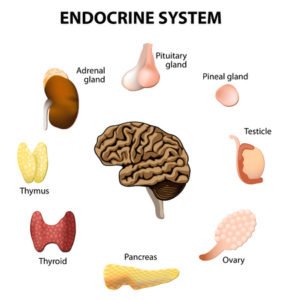 Lucky for you, that’s not how I approach Endocrine topics when I tutor students. In fact, I actually GET EXCITED when tutoring Endocrine! Yes, I realize that this makes me a big nerd. And yes, I am totally okay with that 🙂

The truth is that you don’t have to memorize every little cause, symptom, complication, and treatment in order to become an endocrine master in nursing school. In fact, it’s really a waste of time to try and memorize everything! Even if you can keep all those memorized facts straight long enough to pass your class exam, there’s no way that info will still be clear and strong in your memory when it’s time to take NCLEX.

I’m not saying that you don’t need to memorize anything, though. There’s certain things about Endocrine that you really DO need to memorize. But there’s also a bunch of things that you shouldn’t memorize…and it’s that non-memorization category of concepts that needs to be understood. Once you know the difference between the two types of Endocrine information, then you’ll begin to see how much easier it is to learn (and remember!) the endocrine system.

Endocrine: So What Needs to be Memorized?

The Anatomy & Physiology, of course! But what makes up the A&P of the Endocrine system? It comes down to a list of basic things that can be easily organized into chart form and memorized. You’ll need to memorize 3 types of Endocrine facts:

In my opinion, the best way to memorize these Endocrine facts is to organize the information and practice writing it over and over again in chart form. And over. And over yet again. In fact, when I first learned this myself, I felt like I was wasting so much paper using the “write it out” method of memorization that I finally replaced pencil and paper with a whiteboard and dry erase marker – much better for the environment! Not to mention cheaper in the long-run…

That’s Fine For A&P. But How Do I Learn Endocrine Disorders Without Memorizing Them?

Most students approach Endocrine disorders backwards. They start with the disorder, then try to learn all the facts.

Instead, you should start with the hormone and think about what happens when there’s too much or too little being produced. When you approach diseases this way, studying becomes all about looking for patterns and understanding the bigger concepts. Plus, Endocrine is actually very easy once you get to this step, because all the diseases occur in pairs!  Let’s go through Anti-Diuretic Hormone (ADH) to show you exactly what I mean.

To do this part, you’ll need to have already memorized that Anti-Diuretic Hormone comes from the Posterior Pituitary gland, and that Anti-Diuretic Hormone does exactly what its name says: it tells the kidneys to hold onto water, and only water, which decreases the amount of urine that the kidneys produce. So what happens if you have too much ADH being released by the Posterior Pituitary gland?

And what symptoms would you expect to see if the body is holding onto too much water? Don’t jump to your textbook yet, let’s use your common sense and nursing knowledge, because you already know a lot more than you think!

Ta-Da! Now you know about Syndrome of Anti-Diuretic Hormone (SIADH). That wasn’t as hard as you thought it would be, was it?

Once you understand what the hormone does, it becomes a lot easier to see the patterns and understand (and remember!) what happens when something goes wrong with that hormone.

Want another example? Let’s take ADH in the opposite direction: what happens when there’s TOO LITTLE ADH?

Which leads to what kind of symptoms…?

Voila! You know about Diabetes Insipidus now. Notice how it’s basically the opposite of Syndrome of Anti-Diuretic Hormone (SIADH)?

Ok, But What About The Nursing Care? I Have To Have That Memorized, Right?

Um, no. There’s no “special” nursing care that you only use for SIADH patients. As nurses, we treat the symptoms! Of course, you also have to use your common sense and your new-found knowledge of why these symptoms occur in an SIADH patient so that you can use your clinical judgement to decide which particular nursing interventions would be best.

Fine, I Get The Nursing Care. But I’m Sure That There’s Some Medical Interventions I’ll Need To Memorize…

By going back to your memorized A&P, of course! If SIADH causes too much ADH to be released, then the medical intervention is going to involve something that tries to fix that underlying A&P problem. In the case of ADH, you want to stop the posterior pituitary gland from producing excess ADH. How would you do that? In this case, surgery is going to be your answer! After all, if there’s no posterior pituitary gland…there will be no more excess ADH.

As you go through this study process on your own, compare your educated guesses with the textbook. Often, you’ll find that you’re exactly right! The only difference might be that your explanation will make a LOT more sense than the complicated jargon that the textbook uses. And if you do find that you’ve missed an important detail, simply add it to your own explanation (making sure that you take the time to understand how that new detail fits into the overall A&P, of course!)

Believe it or not, this bottom-up approach to studying is what it means to think like a nurse. And Endocrine really isn’t so bad after all, is it?

4 thoughts on “How to Study Endocrine in Med-Surg”