(Just a reminder…the articles on www.YourNursingTutor.com are for informational and educational purposes only. If you have any health concerns, please seek appropriate treatment!)

UPDATE: I originally published this article to respond to the following student question:

I’ve always remembered the treatments for Heart Attack as the mnemonic MONA. But I heard that the American Heart Association (AHA) has changed their recommendation and now are recommending Aspirin as the first treatment to give for Heart Attack. How does that affect MONA?

However, like most things in life, more and more research has led to more and more change! Thanks to a lively debate in the comments section of this original post, I was alerted to some major changes in Myocardial Infarction (aka Heart Attack) care.

As a result, here’s the explanation for the original meaning and purpose of the acronym MONA, with an added summary of the recent changes, and what this means for nursing students. 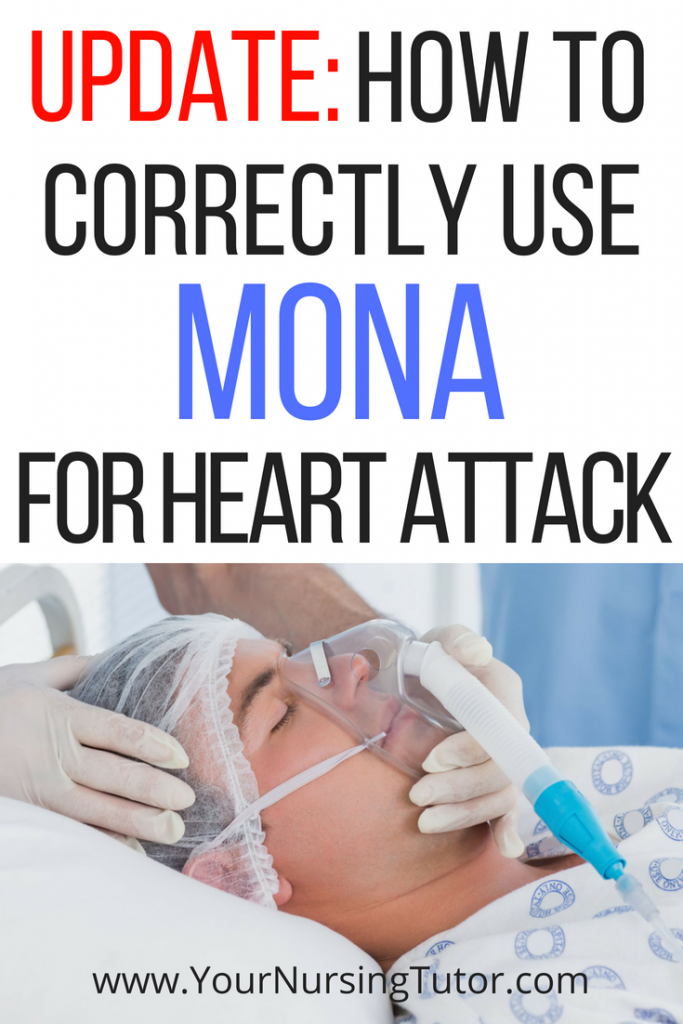 What is MONA for Heart Attack?

First, for those who don’t already know, MONA is a mnemonic that stands for: Morphine, Oxygen, Nitrates, and Aspirin. These are the 4 primary interventions that used to be routinely performed when treating a patient with suspected Heart Attack/Myocardial Infarction (MI).

However, what many students don’t realize is that MONA never represented the order in which you should administer these treatments as a nurse. It is a mnemonic intended to help you remember the components of MI treatment, NOT the prioritization of them.

Past Recommendations for MONA

In a medical setting, when treating a patient with Myocardial Infarction, it used to be recommended to give: Oxygen first, then nitrates, then aspirin, then morphine. The rationale was that there were two therapeutic goals:

Oxygen therapy has a long history of being used for Myocardial Infarction ever since it was discovered to improve angina way back in a research study in 1900. So the Oxygen was most often given first in emergency treatment of heart attack to start increasing the amount of available oxygen in the blood.

Second, nitrates would have been given to vasodilate blood vessels, which presumably allowed more room for blood to pass through the cardiac blood vessels.

Then the aspirin would be given to help “thin” the blood by breaking down platelets. This helps get rid of any clots in the coronary arteries that might be contributing to the blockages causing the Myocardial Infarction.

Finally, morphine might have been given to reduce pain and anxiety, which in turn was thought to help decrease oxygen demand. Morphine also slows the heart rate and has a vasodilating effect because it is a narcotic, but it was not generally given for those specific reasons. It would have been given if the nitrates did not relieve the chest pain or if the patient continued having significant anxiety.

Updated Recommendations for MONA (based on recent research)

The more we learn, the more we realize that there’s still so much we don’t understand. Here’s a brief summary of all the new recommendations. 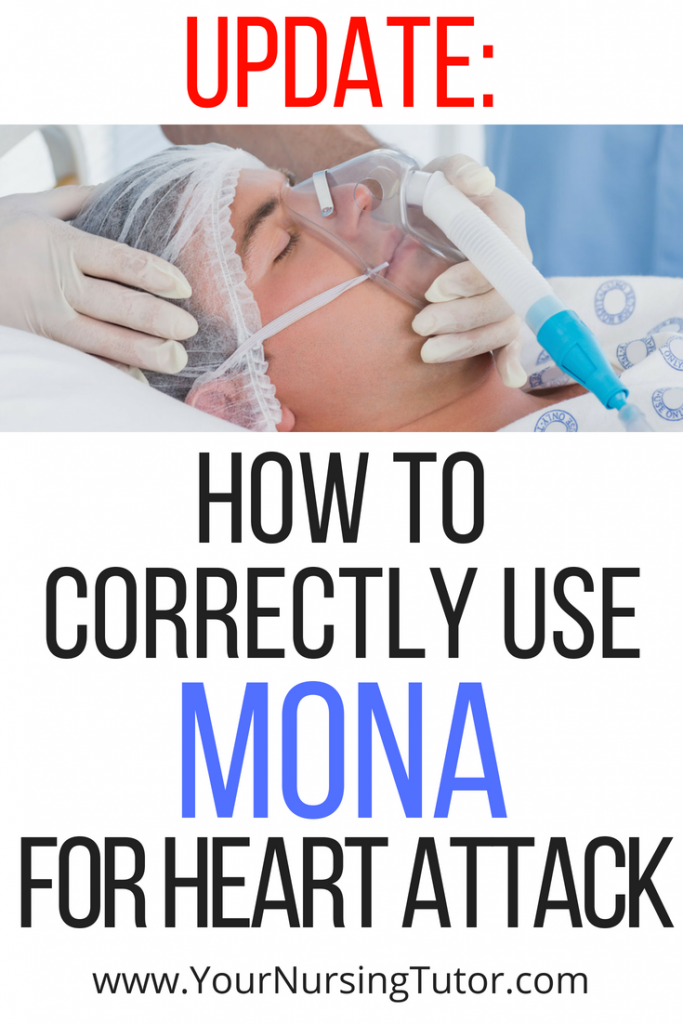 Changes in Morphine Recommendations from MONA

Bottom line: Don’t routinely administer morphine during myocardial infarction. However, it can still be considered an option to help manage severe pain in a heart attack patient.

Changes in Oxygen Recommendations from MONA

Routine oxygen therapy during heart attack is a long-standing tradition, however there were questions about whether this practice was beneficial, or if it caused additional problems as early as 1976.

Later research studies have had mixed results, from some showing increased complications with oxygen therapy and others showing no difference in patient outcomes. These studies compared heart attack patients who were normoxemic despite their current cardiac problems…that means their oxygen saturation was normal.

Changes in Nitroglycerin Recommendations from MONA

The new recommendations for nitroglycerin that we’re talking is for when the patient is under direct medical care, either EMT or in the hospital. Depending on the location of the cardiac blockage, administering nitroglycerin may cause more harm than good. For example, if the blockage is in certain areas of the heart, than the nitroglycerin could expand the blood vessels so much that it causes severe hypotension, which would be problematic in its own way.

In any case, the decision of when it is appropriate to use nitroglycerin is a fairly complicated and advanced topic, and I seriously doubt that you will be required to make this distinction in order to become a safe, effective, beginning nurse.

Bottom line: Nitroglycerin will still be used pre-intervention IF the patient already has it prescribed for angina. But once under the care of emergency personnel, nitroglycerin should not be routinely given. Determinations about the type of heart attack will need to be made in order to determine the best course of action.

…NO Changes in Aspirin Recommendations from MONA

Basically, the only MONA recommendation that remains unchanged is this one: take aspirin. Aspirin still helps to prevent additional clots from forming by reducing the ability of platelets to stick together, which is something that can prevent further cardiac damage.

Answering the Original Question about AHA’s recommendation about Aspirin…

You probably heard the “aspirin comes first” recommendation because if a patient calls 911 for chest pain, they will probably be instructed to take an aspirin while waiting for the ambulance.

But as soon as the EMTs arrive, they will evaluate the patient and decide the next best course of treatment. Once upon a time, I would have guaranteed that the next step would be to slap on that Oxygen mask! However, in light of recent research and the emphasis on evidence-based practice, that is likely to be changing, and has probably (hopefully!) already changed for many EMTs.

Now, they are more likely to administer aspirin (if it hasn’t already been done), and assess to see if any of the other treatments (oxygen, nitroglycerin, or morphine) are even appropriate.

What this means for nursing students

Always look at the context of the question if you see a question like this on an exam. If the patient is hypoxic and in a medical setting, then you will probably still see Oxygen as an answer because of the ABC’s (Airway, Breathing, and Circulation). Hypoxia would be a circulation issue, so oxygen may be indicated in this situation.

If they are in a non-medical setting, then the patient might need to take nitrates first (if the patient has them prescribed and available for angina episodes), or aspirin first if nitrates are not available and a heart attack is suspected.

But if the patient is otherwise stable or has received appropriate treatment, but is still in severe pain, then Morphine may be indicated.

All in all, remember that NCLEX tests if you are a safe, effective, beginning nurse. They are not going to be testing you to see if you can provide complete medical care for a complicated cardiac case using cutting edge research. That’s why understanding the principles behind MONA…both in the way it was used in the past AND in the present…will be your key to answering exam questions on this topic.

A Summary of MONA

As you can see, even with the new research, it’s still not one size fits all! But then again, is anything in nursing cookie cutter? Every patient is different, and needs to be treated differently.

This is a perfect example of how nursing students need to use critical thinking in order to “think like a nurse”. So if you get an NCLEX style question about Myocardial Infarction, and the answer choices sound a lot like MONA…remember to assess the patient, remember MONA, consider the new research… then choose the best answer you can.