Anatomy and Physiology is the single most important topic to master if you want to succeed in nursing school.  If you’ve never been a fan of anatomy and physiology, then you’re in the right place! I believe in breaking through all the confusing technical jargon to get right to the point of what’s most important to remember.  What does that mean for you?  Clear, understandable explanations that give you that “lightbulb” moment you’ve been hoping for.

The primary job of the kidneys is to filter blood and make urine.  Urine may look very different than blood, but the fact is that urine is simply filtered blood!  Here’s an overview of what you should be familiar with when it comes to the A&P of the kidney: 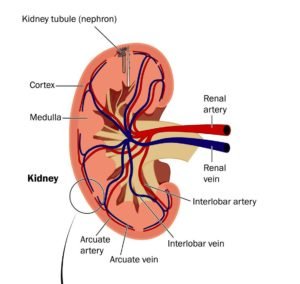 Renal Artery:  The name tells you exactly what it is.  This is the primary artery that feeds oxygenated blood to the kidneys.

Renal Vein:  Another no-brainer because the name tells you what it is.  This is the primary vein that allows deoxygenated blood to drain from the kidney and return to the heart.

Hilus (not labeled):  The Hilus is the location where the artery and vein go through the kidney.

(Renal) Cortex:  This is the outer layer of tissue the makes up the kidney.  It contains all the nephrons, which are the part of the kidney that begins the process of filtering the blood.  The definition of “cortex,” is literally “outer layer.”  So you sometimes see this term referencing other body parts too, such as the cortex (outer layer) of the brain.

(Renal) Medulla:  This is the inner region of tissue that makes up the kidney.  Similar to the term cortex, the word medulla is sort of generic and is also used to refer to the inner layer of other body organs.  The Renal Medulla contains the remaining kidney structures.

(Renal) Pyramid:  This is the first “funnel” to catch urine as it comes out of the nephron micro-system.  It’s called a pyramid because its triangle shape kind of looks like one!  Many small nephrons drain into a single Renal Pyramid, and there are multiple pyramids throughout the Renal Medulla.

(Renal) Papilla:  This is the exit of the Renal Pyramid.  It even sort of looks like the exit side of a kitchen funnel…which is pretty much exactly what it does in the body, too.

Calyx:  The Calyx is the tube that connects to the pyramid to catch the draining urine.  Sometimes you will see them identified as “Major” and “Minor” Calyxes, but don’t get confused.  The Minor Calyxes are smaller and connect to a single Renal Papilla.  The Major Calyxes occur when 2-3 Minor Calyxes combine, so they’re bigger.

(Renal) Pelvis:  This is the area of the kidney where ALL the Calyxes come together and combine to become what is called the Renal Pelvis.  So the urine continues it’s journey by draining into this area.

Ureter:  The Ureter is the last leg of urine’s journey out of the kidneys.  It drains from the Renal Pelvis into the Ureter, and down into the bladder to await the final step…urination!

4 thoughts on “Anatomy of the Kidney”