Anatomy and Physiology is the single most important topic to master if you want to succeed in nursing school.  If you’ve never been a fan of anatomy and physiology, then you’re in the right place! I believe in breaking through all the confusing technical jargon to get right to the point of what’s most important to remember.  What does that mean for you?  Clear, understandable explanations that give you that “lightbulb” moment you’ve been hoping for. 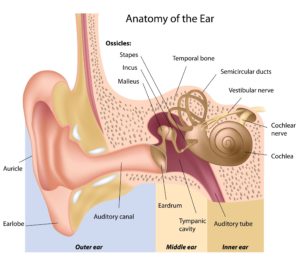 Here’s an overview of what you should be familiar with when it comes to the A&P of the ear:

Auricle:  “Auricle” is the most recognizable part of your ear.  You’ll also see it referred to as the “pinna.” The unique shape actually helps funnel sound waves into the auditory canal!

Earlobe:  Still the most popular location for a piercing!

(External) Auditory Canal: This is the official name for those holes in the sides of your head!  It’s about an inch long in adults, and ends at the eardrum. The Auditory Canal also contains the glands that produce ceruman (ear wax).

Tympanic Membrane (aka Ear Drum): The ear drum is the very thin membrane that acts as a “wall” completely separating the external ear from the middle ear.  Which means that your mom was right…if you stick that q-tip too far into your ear, you really CAN puncture your ear drum!  The ear drum is the first step in the chain reaction that turns sound waves into sound.

Tympanic Cavity: This is the name of the physical space that contains the all the structures of the middle ear.

Ossicles:  These are the 3 smallest bones in the body.  They pick up on ear drum vibrations and pass them through to the middle ear.

Oval Window (aka Vestibular Window; not labeled in diagram): The Stapes covers up this little hole that marks the separation of the middle ear and the inner ear.  The sound vibrations that the ossicles are transporting move through here and into the cochlea.

Round Window (not labeled in diagram): This nifty little hole is covered by a thin membrane that is similar to the ear drum, but it has a very different function.  When the stapes vibrates against the oval window, it’s supposed to cause the fluid in the cochlea to start swishing around.  But since the cochlea is a stiff structure filled to the brim with fluid, there’s really no room for swishing…except that the membrane covering the round window stretches to accommodate the extra space needed for swishing.  Pretty cool design!

Semi-circular Ducts: There are actually 3 of these:  the posterior canal, the horizontal (aka lateral) canal, and the superior (aka anterior) canal (isn’t it annoying how almost everything in anatomy seems to have at least 2 names?).  The body uses these 3 semi-circular canals to determine position and movement.

Cranial Nerve VIII (aka the Vestibular and Cochlear Nerves, aka Vestibulocochlear Nerve, aka Acoustic Nerve): Do you remember your mnemonic for the 12 cranial nerves?  Nerve #8 is in charge of balance and sound (it IS in the ear, after all).

Temporal Bone: No tricks here, the temporal bone is just a piece of your skull.  Review the

Bony Labrynth: A special name for the area within the temporal bone that is carved out specifically for the cochlea and semi-circular ducts to fit into.

Auditory Tube (aka Eustachian Tube): This canal connects the ear to the nose and throat cavity.  Does it now  makes sense why “Ear, Nose, and Throat” topics are usually all lumped together?  This little tube is usually closed, but can be opened when you do things like yawning or swallowing.  Go ahead, try it for yourself right now…nobody will think you look weird

5 thoughts on “Anatomy of the Ear”